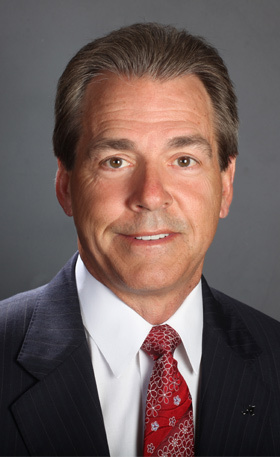 A man of vision who has a proven record of championship success, head coach Nick Saban returned the University of Alabama to the top of the college football landscape with his commitment to building the total program. After the victory over Clemson in the 2016 College Football Playoff National Championship Game, Saban joined Paul "Bear" Bryant as the only two coaches to win five national titles in the modern era.

In his 10th season in Tuscaloosa, Saban's uncompromising dedication to excellence in every phase of the program has resulted four national championships over the last seven years. A six-time National Coach of the Year, Saban has achieved resounding success as a head coach and has earned a reputation as an outstanding tactician, leader, organizer and motivator. Those qualities have sparked impressive turnarounds at every stop of his career. Saban's consistent approach and disciplined leadership are the reasons his teams are known for exhibiting grit, determination and resilience, often overcoming adversity to achieve victory.

Saban's 2015 team secured the Crimson Tide's fourth national championship in the last seven years. They became the first team to win back-to-back Southeastern Conference Championships in 17 years (Tennessee, 1997-98) and are the only program to earn an invitation to each of the first two College Football Playoffs. Saban led his team to victories in the final 12 games of the season, including wins at No. 8 Georgia, at No. 9 Texas A&M, vs. No. 4 LSU, at No. 17 Mississippi State, against No. 18 Florida in the SEC Championship Game, vs. No. 3 Michigan State in the Goodyear Cotton Bowl and over No. 1 Clemson in the College Football Playoff National Championship Game. The senior class won a school-record 50 games (50-6) over the last four years with three SEC Championships and two national titles.