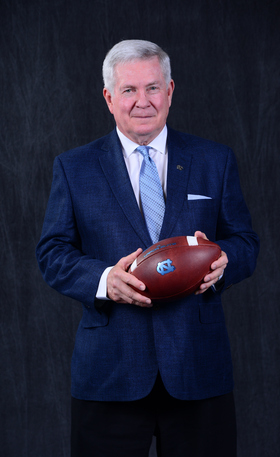 Brown, who will be inducted into the National Football Foundation's College Hall of Fame in December, won more college football games than any coach in the country over a 24-year period from 1990-2013.

He was previously the head coach of the Tar Heels from 1988 to 1997. He led Carolina to three 10-win seasons, six consecutive bowl games and two top-10 AP finishes. At Texas, the Longhorns won the 2005 BCS national title, two conference titles and four Big 12 South Division titles.

"Mack Brown has a proven record of building great teams, and he doesn't just develop football players – he also develops people of strong character," says Director of Athletics Bubba Cunningham. "He knows how to win championships, and he expects his student-athletes to win in the classroom and community, as well. We are excited about his plans for our football program, and I am thrilled to welcome Coach Brown and wife Sally back to Chapel Hill."