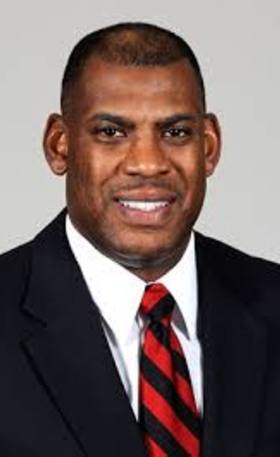 Mel Tucker was named the 26th full-time head football coach at the University of Colorado on December 5, 2018. He came to CU from the University of Georgia, where he spent the previous three years as the defensive coordinator and secondary coach for the Bulldogs.

Tucker, 46, replaced Mike MacIntyre, who was dismissed as CU’s head coach after coaching the Buffaloes for six seasons. This is his first collegiate head coaching position.

He is not the first to be hired at Colorado with no previous collegiate head coaching experience, though he does have five games in the National Football League as an interim head coach. In the modern era (post-World War II), he joins an impressive list in Dal Ward (1948), Sonny Grandelius (1959), Eddie Crowder (1963), Bill McCartney (1982), Rick Neuheisel (1995) and Jon Embree (2011) as full-time coaches who were previously assistants. McCartney, of course, went on to become CU’s all-time winningest coach with a 93-55-5 record over 13 seasons, and all but Embree had winning records.

Tucker enjoyed a tremendous run at Georgia, where he was instrumental in the Bulldogs compiling a 32-9 record along with winning the school’s first Southeastern Conference championship in 12 years when UGA defeated Auburn in the league’s 2017 title game. One of the staff’s top recruiters, 247Sports.com ranked him as the No. 14 recruiter in the nation based off the class he helped UGA sign ahead of the 2018 season.

In the 2018 SEC Championship game in which Alabama rallied to win, 35-28, his Bulldog defense held the Crimson Tide scoreless in the first quarter for the first time all season, forced a UA season-high four three-and-outs (in 12 possessions) and held its Heisman Trophy candidate, quarterback Tua Tagovailoa, to a season-worst 92.3 rating. His defenses were dialed in on third down, as the Tide was 8-of-25 in the last two games against UGA, dating back to the 2018 national championship game which Alabama also rallied to win, 26-23, in overtime.

In 2017, Tucker was part of the UGA staff that led the Bulldogs to a school record-tying 13 victories, along with the school’s first SEC championship since 2005 and first appearances in the College Football Playoff (and victory, which was over Oklahoma in the Rose Bowl/CFP semifinal game) and in the College Football Playoff Championship game. Georgia’s defense finished second in the SEC and sixth nationally in both scoring defense (16.4 ppg) and in total defense (294.9 ypg), while also finishing second in the conference in rushing defense. One of his players, Roquan Smith, won the Butkus Award as the nation’s top linebacker.

In his first year at UGA, Tucker guided a Bulldog defense that ranked among the nation’s top 20 units in total defense, passing defense, turnovers gained and first down defense.

Tucker was named UGA defensive coordinator and secondary coach in January 2016, just days after winning a national championship with Alabama (which defeated Clemson 45-40 in the CFP title game). He spent that 2015 season serving as assistant head coach and defensive backs coach for the Crimson Tide, the third time he was hired by Nick Saban.

Saban gave Tucker his start in the coaching profession in 1997 when he hired him as a graduate assistant at Michigan State. He spent two seasons there, working with the defensive backs directly under another highly successful collegiate head coach in Mark Dantonio, who eventually would be named the Spartans’ head coach.