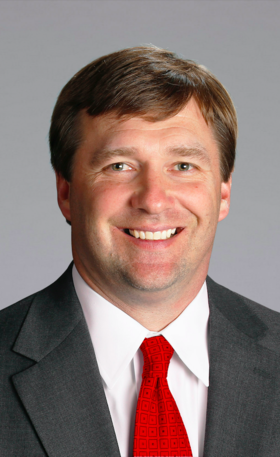 His impact, along with a stellar group of assistant coaches, players, and a passionate fan base, has put Georgia on the national stage three years running.  The Dawgs have finished 3rd, 5th, and 5th in the final CFP regular season rankings the past three seasons.

Smart’s 2019 Bulldogs became the first team in Bulldogs history to win 11 or more games in three straight seasons.  A four-year record of 44-12 ties the school record for a Bulldog senior class. Along the 2019 schedule, the ‘Dogs defeated four top 15 teams in the final CFP ranking: Notre Dame, Florida, Auburn and Baylor and finished as the fifth-ranked team in the final CFP ranking of teams.  The 2019 Bulldogs defeated Baylor in the Allstate Sugar Bowl marking the 23rd consecutive season Georgia has played in a bowl game—second best active streak in the country.

The Bulldogs in 2018 posted an 11-1 regular season record, a second straight SEC Eastern Division title, and a ranking as high as number four in the College Football Playoff poll.  Georgia landed in the prestigious Allstate Sugar Bowl on Jan. 1, 2019—the program’s tenth all-time appearance in the New Orleans classic. It also extended the Bulldogs’ bowl-game streak to a record 22 straight years, second-highest active streak in the country.  For his efforts, Smart was named a semifinalist in the Maxwell Club George Munger National Coach of the Year balloting and a finalist in the Bobby Dodd Trophy Coach of the Year competition.

Smart’s second season in 2017 was a special one, with an 11-1 regular-season record, an SEC championship, a win over Oklahoma in the Rose Bowl Game (College Football Playoff semifinal) and advancement into the College Football Playoff National Championship Game in the program’s first appearance.  In the SEC championship game, the Bulldogs avenged their only regular-season loss with a 28-7 victory over Auburn. It was the first conference title since 2005 for the Red and Black.

In Smart’s first season leading the Bulldogs, Georgia made its 20th straight bowl appearance and posted four fourth-quarter comebacks, including wins over No. 8 Auburn and No. 22 North Carolina.  He led the Bulldogs to an 8-5 final record, which included a victory over TCU in the AutoZone Liberty Bowl.

Smart has also made an immediate impact in recruiting circles by posting the nation’s third-ranked class in 2017, followed by two more classes of signees that ranked either first or second by every authority.

In addition to his coaching duties, Smart oversees the Kirby Smart Family Foundation, which is focused on being champions in the community by supporting needy children and families facing adversity.

Smart officially came home to Georgia on Dec. 6, 2015, but he had unfinished business at Alabama, which was still chasing a national title.  He juggled two jobs for a month until Jan. 11, 2016, when the Crimson Tide won its fourth national championship in a 7-year span. Twelve hours later, he was at work in Athens, where he remains one of nine head coaches at schools from Power 5 conferences that are coaching at their alma mater.

Smart had served on the Alabama staff the previous nine years, the past seven as defensive coordinator. During his tenure at Alabama, the Crimson Tide won three BCS National Championships, one College Football Playoff national title, three SEC crowns, six SEC Western Division titles, and was ranked in the nation’s final top 10 the last eight years in a row.

Smart was one of the nation’s most respected defensive coordinators. During his time at Alabama, he coached players at three different positions, in addition to his coordinating duties.  He was recognized as the 2012 AFCA Assistant Coach of the Year and the 2009 Broyles Award winner as college football’s top assistant coach. He also was a finalist for the 2015 Broyles Award.

As a player, Smart was a four-year letterman at defensive back for Georgia, where he was a First-Team All-SEC pick as a senior. He finished his career with 13 interceptions, a mark that still ranks sixth in UGA annals, and paced the Bulldogs with six interceptions in 1997 and five in 1998.  He led the SEC in interceptions during his final season. Smart also scored two points as a collegian. He was the first player in UGA history — and one of just two Bulldogs since the rule was introduced in 1988 — to return a blocked PAT for two points, having brought one back 88 yards against New Mexico State in his freshman year of 1995.

A four-time member of the SEC Academic Honor Roll, Smart received his bachelor’s degree in Finance from Georgia in 1998 and his master’s in Physical Education from Florida State in 2003.

The Bainbridge, Ga., native is married to the former Mary Beth Lycett of McDonough, Ga., a 4-year letterwinner and 2-year starter, on the Georgia women’s basketball team from 2000-03.  The couple met long after their undergraduate days at Georgia, when Lycett — then working in the UGA Athletic Association Business Office — helped arrange Smart’s trip to interview for the Bulldogs’ running backs coaching job in 2005.  They are the proud parents of twins Weston and Julia (born Feb. 8, 2008) and son Andrew (born May 25, 2012).