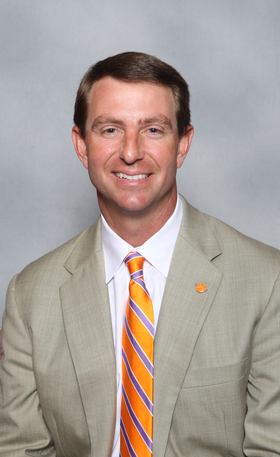 There is a strong coaching heritage over the 121 years of Clemson football that dates to the early 1900s, when John Heisman led the program. Jess Neely, Frank Howard and Danny Ford continued the winning and joined Heisman in the College Football Hall of Fame.

Dabo Swinney has been at Clemson for just 10 years as head coach, but he cemented himself as a coaching legend when he led the Tigers to the 2016 national championship, the second in school history (1981).

The Tigers maintained that elite status in 2017 despite having only six scholarship seniors and losing most of their offensive firepower from 2016. The 2017 season might be the best for Swinney, who was a finalist for the AP, Bear Bryant, Dodd, Eddie Robinson and George Munger Coach-of-the-Year Awards. That is saying something for someone who has been named national coach-of-the-year by at least one service four of the previous six years.

Offensively, Swinney had to replace players who accounted for 77 percent of the offense during the 2016 national championship season.

While Clemson was ranked No. 5 in the preseason AP poll, few expected the Tigers to be ranked No. 1 in both polls and the College Football Playoff ranking entering the bowl season. In fact, Clemson was not even the preseason choice to win the ACC Atlantic Division. But the Tigers won that title for the third year in a row (a first for the program since 1986-88).

Despite the setback in the Sugar Bowl to the eventual national champion, Alabama, Clemson finished ranked No. 4 in both polls. Swinney joined Bobby Bowden as the only ACC head coaches to lead a program to a final top-five ranking three straight years. After the season, he was inducted into the Alabama Sports Hall of Fame.