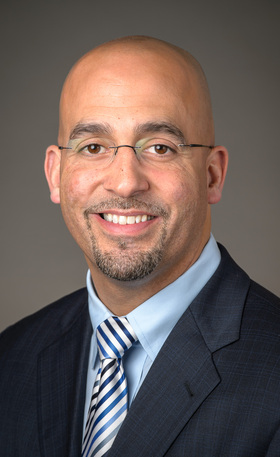 On January 11, 2014 James Franklin, a Pennsylvania native, was named the 16th head football coach in the storied history of the Nittany Lion program.  Franklin, enters his sixth year as a collegiate head coach, leading his first five squads to a bowl game, with post-season victories the past three of the last four years. He owns a 38-27 career record, with four consecutive winning seasons. Franklin has 21 years of coaching experience at the collegiate and NFL level.

In his first four years as a head coach, Franklin mentored 16 players that have gone on to the NFL ranks
and he has secured Top 25 recruiting classes each of the last four seasons, including back-to-back Top 20 classes at Penn State.

Coach Franklin emphasizes four core values for the Penn State program -- a positive attitude, great work ethic, competing on and off the field and the ability to sacrifice.  Franklin guided the Nittany Lions to a 7-6 record in 2015 and a berth in the TaxSlayer Bowl. Under his tutelage that season, Carl Nassib claimed a trio of national awards -- Lombardi Award, Lott IMPACT Trophy and Ted Hendricks Award -- and became Penn State's 13th unanimous Consensus All-American..  Nassib also led the nation in sacks with a school-record 15.5 in 2015.

Before coming to State College, Coach Franklin was a driving force behind the meteoric rise of Vanderbilt football in the three seasons as the Commodores head man.    Franklin directed Vanderbilt to consecutive Top 25 finishes for the first time in the 124-year history of the program. The 2012 Vanderbilt squad finished No. 23 and 20, respectively, marking its first AP final ranking since 1948.  Coach Franklin led Vanderbilt to a bowl game in each of his three seasons in Nashville, with the last two years resulting in wins over North Carolina State (Music City Bowl) and Houston (BBVA Compass Bowl). Over the last 20 games during the 2012-13 seasons, the Commodores' 16-4 record was second-best in the SEC to Alabama's 17-3 mark.

Franklin began his coaching career as the wide receivers coach at Kutztown (Pa.) University (1995) and was a graduate assistant coach at his alma mater, East Stroudsburg (Pa.)   His 21 year coaching career has also stints at James Madison, Washington State, Idaho State Maryland and Kansas State as well as one season as a wide receivers coach for the Green Bay Packers.