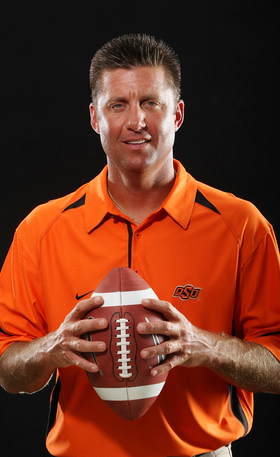 Gundy became Oklahoma State's head coach on Jan. 3, 2005. He served as OSU's offensive coordinator and associate head coach the previous four seasons. He served on Oklahoma State staffs under Pat Jones, Bob Simmons and Les Miles. He was also on staff at Baylor and Maryland before returning to his alma mater. Coach Gundy was the 2011 winner of the Paul “Bear” Bryant College Coach of the Year Award selected by the Sportscasters and Sportswriters Association and the Eddie Robinson National Coach of the Year Award presented by the Football Writers Association of America after leading Oklahoma State to a 12-1 record, its first Big 12 championship and BCS bowl game appearance in 2011. In guiding the Cowboys to the Big 12 title, OSU became the first school other than Oklahoma or Texas to win the conference since 2003.Since 2010, Oklahoma State has four seasons with at least 10 wins, an outright Big 12 title (2011) and a share of the Big 12 South title (2010). The Cowboys finished the 2010 and 2011 seasons ranked in the top 10 of the Associated Press poll and climbed to as high as No. 6 in the nation in 2013 and No. 4 in the nation in 2015.Evidence of Oklahoma State’s rise on both the Big 12 and national levels during Mike Gundy’s tenure as head coach is everywhere.