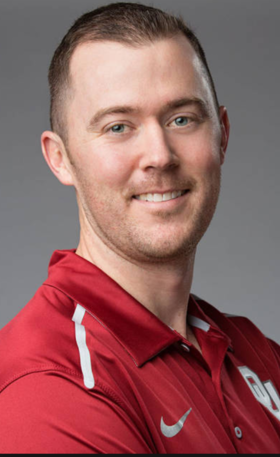 He presided over a 2016 OU offense that led the nation in passing efficiency rating (mark of 193.79 set an FBS record) and pass completion percentage (.706), and ranked second in total offense (554.8 ypg), third in scoring offense (43.9 ppg) and third down conversion percentage (.515). Quarterback Baker Mayfield and wide receiver Dede Westbrook finished third and fourth in Heisman Trophy voting, respectively, while Westbrook was a unanimous All-American and OU's first recipient of the Biletnikoff Award as the nation's outstanding receiver. Only one team in OU history (7.6 in 1971) averaged more yards per play than the Sooners' 7.5 in 2016.

Riley was the recipient of the 2015 Broyles Award (given to the nation's top assistant coach) after OU's offense ranked fourth nationally in scoring (43.5 ppg) and seventh in total offense (530.2 ypg) in his first season in Norman. He coached the Sporting News National Player of the Year (Mayfield), while Westbrook was Big 12 Offensive Newcomer of the Year. Eight offensive players earned all-league honors.

The Muleshoe, Texas, native joined the Sooners after a highly successful five-year stint working under then-head coach Ruffin McNeill at East Carolina from 2010-14.

Riley installed and directed a new up-tempo spread offensive scheme that made an immediate impact at ECU as the Pirates set more than 50 team or individual school offensive records in his five seasons with the program. His five squads recorded the top five passing seasons in school history and the top four positions for total offense in a season.

He spent his final season with the Pirates serving in the role of assistant head coach/offensive coordinator/quarterbacks coach in 2014 as East Carolina ranked third in the nation in passing offense (371.9 ypg) and was fifth in total offense (533.0 ypg). The Pirates set a single-season school record with 6,929 yards of total offense in 2014.

Carden took over the job in 2012 and went on to break the majority of Davis' records, becoming the first 4,000-yard passer in program history and setting single-season standards for completion percentage (70.5 in 2013) and passing yards (4,736 in 2014). Carden earned Conference USA MVP honors in 2013 and was the American Conference's Offensive Player of the Year in 2014. He led all FBS passers with 392 completions in 2014.

Prior to ECU, Riley spent seven seasons on Texas Tech's staff where he was part of seven bowl teams and five bowl wins. During that span, Red Raiders quarterbacks won NCAA passing titles in 2003, 2004, 2005 and 2007. While at TTU, Riley subsequently immersed himself in Mike Leach's offense and worked his way into a full-time position on his staff, eventually calling plays for Texas Tech as interim coordinator in the 2010 Alamo Bowl. The Red Raiders racked up 579 yards in a 41-31 victory over Michigan State, marking a phenomenal start to his career as a play caller.

A 2006 graduate of Texas Tech, Riley and his wife, Caitlin, have two daughters, Sloan and Stella.